I've been drifting, especially since Covid hit. For years, I've told students that the ones I worry about most aren't those who struggle---it's the ones who drift through four years of college without ever taking hold of anything. No passion. They may do okay, even get good grades, but there is nothing they are moving strongly towards.

After over 30 years of teaching, all I have been doing recently in my teaching is adding another layer of icing. I've worked on a few things---a couple of books for class, new technology for remote learning---but I've felt stagnant. Doing what I need to do has been enough, mostly.

But it isn't.  Fortunately, things are starting to feel different.

A high point during the fall semester was our annual camping trip over midterm break.  Alumnus and friend Tony Vorwald arranged an overnight canoe trip in Jackson County.  Beautiful weather, a few students fishing, being awakened by a full moon shining through the tree canopy, and perfect weather for being on the river. Now that's the kind of drifting I can support! 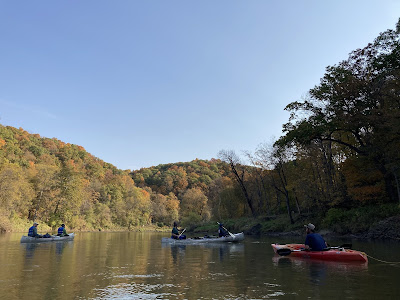 This semester, I'm teaching an environmental policy class, and I'm loving it. New readings, great students. And I should give a shout-out to those students, some of whom have worked with me on local climate-change data---Sam, Lyndy, Taiana. They really kept me going through last summer's downtime. And they inspired me to teach the new course.

The research on local climate-change data has led me to involvement with the city, a lecture to an engineering company, a conference presentation to environmental educators, and a further research project with a student, Tyler, for this coming summer.

Over the holidays, a different type of inspiration came from Wim Hof, the Ice Man, and his breathwork and cold exposure. And learning about him led me to Yes Theory. And that led me to seeking discomfort.  I'm eating better, losing weight, wearing a fitness band, and challenging myself a bit. In the photo below, I am in just my shorts out in the snow dumping the compost bin. Fortunately, no neighbors were out to report the crazy man in the backyard. 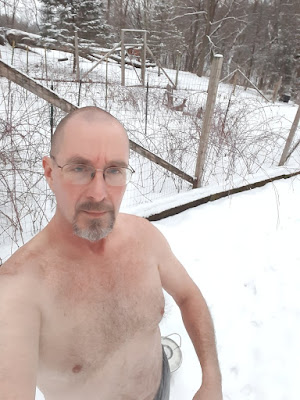 And here is the new motorcycle I'm about to purchase for touring: 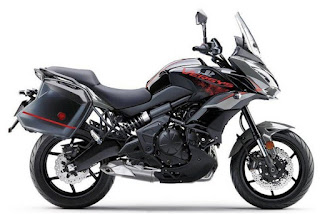 I'm going out West once again.  I plan to scatter my sister's ashes in Idaho.  And I plan to go skydiving this summer, too.

The theme of all this is that I hope to come out of the Time of Covid actually healthier in most ways---my weight down (chart below), fitter physically, and more full of zest for life.  For now, I'm guardedly optimistic. 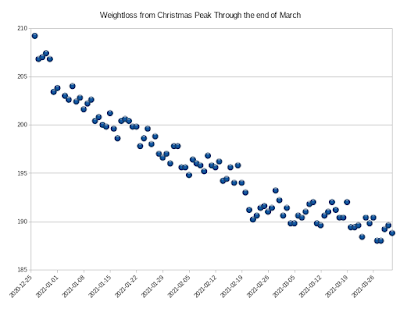 Posted by Dale Easley at 8:29 PM No comments:

In the 1980-81 academic year, Jim Shields and I were editors of our college newspaper, The Guilfordian.  For April 1st, we decided to follow the tradition of creating a spoof issue.  Some of our staff, possibly led by John Mottern, our photo editor, landed on the theme of squirrel attacks: 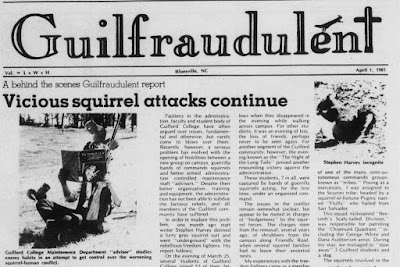 Needless to say, we had a blast with the issue, then finished out the semester and went on with our lives.  However, this morning I was browsing the Guardian newspaper online and came across this article: 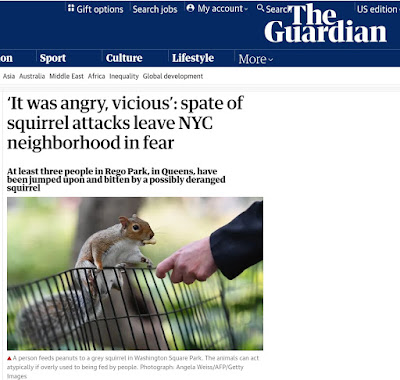 I had just finished reading about the storming of the U.S. Capitol by terrorists waving Confederate flags, wearing MAGA hats and Camp Auschwitz hoodies, and claiming to be patriots.
Back in 81, we were joking around, intentionally being absurd.  There's less humor in the absurd nowadays.

For my morning walks, I've started taking my camera, especially at sunrise.  Below is a common view of Wartburg Seminary, sticking up like a Harry Potter castle above
the trees. 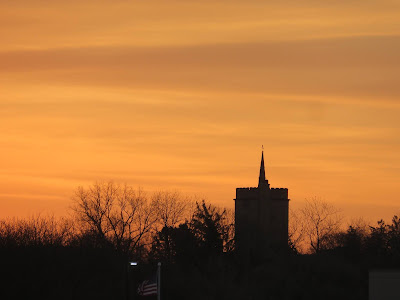 However, this morning, I was astounded to see a UFO hovering above it, lowering some sort of tube.  I assure you, I did not create the image below with digital manipulation.  It was a single exposure.  Is that some sort of tube hanging from it, perhaps for lowering aliens or abducting seminary students?  Let me know in the comments below what you think. 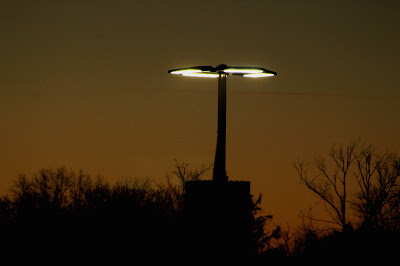 Posted by Dale Easley at 8:21 AM No comments:

So far, I've avoided Covid-19. But I can't help comparing it to malaria, which I survived 40 years ago while teaching math in Kenya after college.

Malaria is a consistent killer. Hundreds of thousands die each year, three-fourths of which are younger than five years old. Little kids. Little African kids, mostly. And that, unfortunately, is one of the reasons insufficient research has been done on ways to combat it.

Research isn't cheap. Most work is collaborative, and the work requires facilities, salaries, and equipment. (The solitary genius is mostly a myth.)
Which research is supported depends upon the values of the people, organizations, and governments that control funding. Two-year-old African kids simply aren't valued much, not in terms of dollars spent on their well-being. No malaria vaccine is yet approved.

The authors of a study published in the top science journal Nature, estimated that two-thirds of the reduction in cases of malaria were due to insecticide-treated bed nets. According to the CDC Foundation, such nets, with long-lasting insecticide and sized to protect three kids, cost $5. That we aren't handing them out like beads at Mardi Gras says a lot about what we value. Or don't.

A net to save a child or a mask to save grandma. Simple things. Cheap. And an immediate help while we wait on vaccines. While many conservatives speak out in support of the sanctity of life, many liberals speak out in support of protecting the poor and vulnerable. If both groups mean what they say, then perhaps nets and masks can offer areas of potential agreement.

Posted by Dale Easley at 9:31 PM No comments: 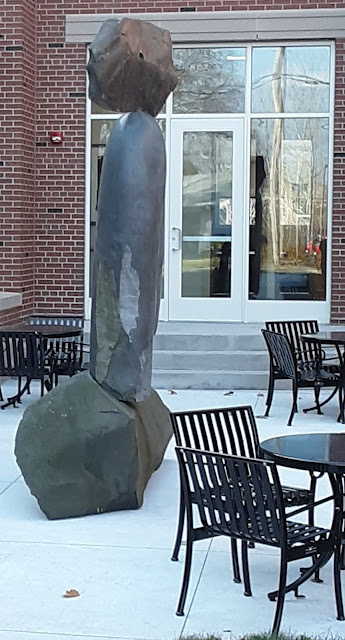 Sculpture abutting the newly erected Peter and Susan Smith Welcome Center at the University of Dubuque.
Update:  New lights were installed recently, consistent with the theme: 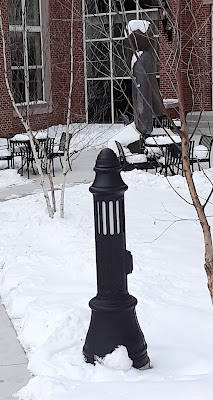 Posted by Dale Easley at 8:50 AM No comments:

Dad was born in 1916, just starting high school when the Great Depression struck. That summer, he had raised a crop of tobacco to pay for clothes and school expenses, and when the market crashed that October, the sale of his summer's production brought one dollar. In today's dollars, that's about $15 for a summer's work at a hot, dirty job. He said that starting school with no money would have been a lot worse if everyone else weren't in the same shape.

After that, I don't think Dad ever worried too much about what he wore.

Dad's father was a bit of a gentleman farmer at the beginning of the Depression. He raised some tobacco with the help of sharecroppers on the farm, and he oversaw the work on some larger plantations in the area. His wife was quite proud of being from town and being descended from good people, including Betsy Ross. When the Depression hit, Grandpa lost the farm to the bank and started drinking, and grandma moved into a separate bedroom.

My father would never buy anything on credit. Ever.

During World War II, Dad learned to work on airplanes and, after the war, joined an airline starting up with surplus DC3 planes. Soon after, he met my mom and married, moving back to near where he grew up. They built their own home, a log cabin made of trees cut on his brother's farm. No electricity, no running water, no phone.

They paid for everything with cash.

Dad had little time to get to know his in-laws before marrying Mom—they got married six weeks after they met. Dad was 32 and Mom was 19. She grew up in the hills of North Carolina during the Depression, which may explain why she was willing to put up with, even embrace, Dad's ways.

Dad was impressed with his father-in-law. Mom's dad may have been a hillbilly, but he loved to read, had traveled outside the hills when younger, and embraced a self-sufficiency that contrasted with Dad's own upbringing. Mom's family was poor in an income/cash sense, but they raised a big garden, grew an orchard, milked a cow, raised pigs, canned and preserved food, and never went hungry.

Dad and Mom always had a large garden, raised livestock, dug their own well for water, and kept multiple freezers and a block outbuilding stocked with food.

I grew up never knowing what it felt like to be hungry. And despite the economic turmoil of the pandemic, there are many more sources of aid in place now, largely because of programs dating to the 1930s—put in place by my Dad's generation.  During the Great Depression, we learned a lot about how to better take care of each other.

My parents and neighbors always found time to help each other.

I think those relationships are key to overcoming despair.  As Robert Waldinger says in one of my favorite TED talks, "Loneliness kills."  People with relationships they believe they can depend upon live longer, even healthier, lives.
Posted by Dale Easley at 11:59 AM No comments:

For the last 3+ years, I've been weighing nearly daily, trying to lose weight plus determine what behaviors helped or hurt. Take a look: 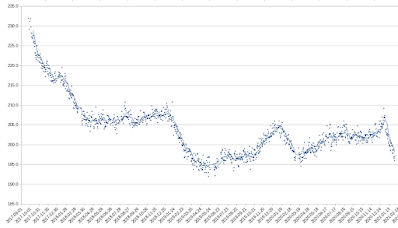 Look closely and some patterns appear:
What's going on? A clue comes by looking at a couple of years of daily averages:

Something happens Thursday nights and over the weekend. It's really not a mystery.
In January to early May, it's typically poor weather for riding my scooter, so I walk more. I also shovel snow. And I keep myself on a regular routine. In summer and early fall, I ride my scooter, walk less, have no snow to shovel and the grass seldom needs mowing after July or so. I like to cookout, and I keep beer in stock. The extra calories add up.
Still, from when I started to the current date, I've lost about 35 pounds. My blood-test results have improved, and I feel a significant difference when I walk. Uphills are easier without the 35-pound pack I carried on my stomach and hips. So what have I learned about my body and weight loss?

Posted by Dale Easley at 9:07 PM No comments:

Dale Easley
Dale Easley is a Professor of Environmental Science at the University of Dubuque, which he joined in 2005 after 15 years at the University of New Orleans. He has been a volunteer math teacher in Kenya, a volunteer working on water wells in Haiti, and a Fulbright Fellow in Qatar. His interests include environmental geology, statistics, and the intersection of science and culture. Currently, he focuses upon storytelling in science.